Homeless where the heart is: Shelter couple weds 26 years after divorce

A homeless Bellville couple have found a new home for their hearts after getting married for a second time to each other.

Dirk and Monica Engelbrecht were divorced 26 years ago but reconnected last year.

On 20 May they tied the knot – again – during a kwaai ceremony at their shelter and Monica says their bond is now stronger than ever.

“After our divorce, Dirk and I lost contact with each other until he reached out on Facebook on our daughter’s 31st birthday last year,” she says.

“After that we started chatting again and three weeks later, he sold all his belongings so that he could move from Mpumalanga to be with me in Cape Town.”

The couple have a daughter in Cape Town, but Dirk also has four adopted children living across the country.

They had been staying with their daughter, who is unemployed, before being forced to live in shelters since last October.

“I always knew in my heart that we would be back together one day but I just did not know when, so when Dirk came back into my life, I fully embraced it and we have been happier than ever before,” says Monica.

“When we told the people at the shelter that we wanted to get married, they said they would help us but we thought it would just be something simple, but instead they pulled out all the stops.”

Monica said she was overwhelmed by the efforts of the Voortrekker Road Corridor Improvement District (VRCID) and Mould Empower and Serve (MES) who turned their Bellville shelter in AJW Street into a lavish wedding reception while they were also sponsored with a cake from the local Pick n Pay.

“There was sparkling wine and snacks, and the wedding car had balloons and ribbons on it, it was so special,” says the blushing bride.

“When I arrived at the shelter, I saw the roses by the gate and on the tables, it was so beautiful. I never expected so much care and love.

“Everyone went out of their way to make this day so special for us. I will never forget it.”

Monica adds: “We are very happy that we are back together and I know that soon we will once again have a place to call our own.

“Right now we are just enjoying our honeymoon period and being married again.”

Dad ’stabs two stepsons’: Man in court after 20-year-old is killed in ‘self-defence’ 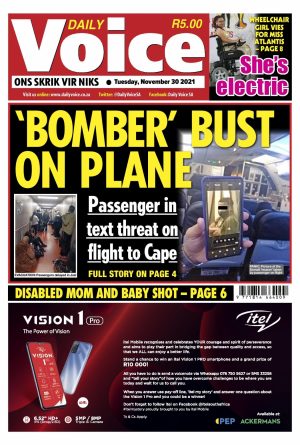