Hair activist giving back to communities

Accepting her “flaws” has helped Vanessa Cookson of Surrey Estate realise her potential. And now she is a self-made hair activist and aspiring entrepreneur giving back to communities.

Vanessa’s hair turned grey more than 12 years ago, and the now 44-year-old says after losing the battle of holding back the greys, she’s instead chosen to embrace it and is now happier than ever.

“I tried to cover it up as most women do, and also because I thought I was still too young to be walking around with a head full of grey hair,” she says, adding she was teased a lot.

“But I just got fed up with constantly having to dye my hair.

“I then started embracing my natural colour after seeing other women on social media and started following some of our local female entrepreneurs that were selling natural hair products and were activists for the natural hair movement.”

To spread the word, Vanessa started Brown Girl Creations and as an activist she collaborates with NPOs in Surrey Estate, Manenberg and Heideveld.

She’s since done outreach programmes in six rural areas where she handed out sanitary gift bags as well as food and clothes hampers.

She says she mostly focuses on orphaned and abandoned children when she hosts information sessions on natural hair and then treats the girls with a new hairdo.

“They first need to start by accepting their hair and loving themselves no matter the “texture”.

“And this whole thing about teasing kids over their hair is another prime example of what’s being taught at home, but fortunately for us we are living in an age where the hair and beauty narrative is being changed slowly, but surely,” says Vanessa. 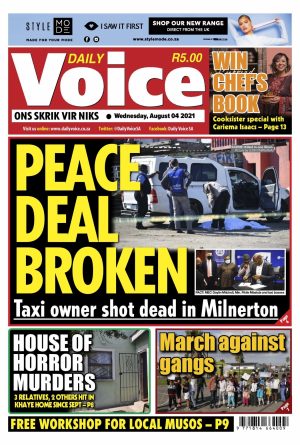