A Hanover Park family was left heartbroken after the charges against two cops accused of killing an innocent man were provisionally withdrawn in April.

Now the widow of security guard, Marlon Fuller, 38, says she is being victimised by local police after she reported a seperate incident.

Marlon, from Cascade Court, was shot on 5 December, allegedly by police reservist Constable Johan van der Merwe, who fired a shotgun into a crowd of people.

Following an investigation by the Independent Police Investigative Directorate, fellow reservist Constable Eugene Jones was arrested and charged with defeating the ends of justice.

Sharon says she was stunned when the charges were withdrawn.

National Prosecuting Authority (NPA) spokesperson, Eric Ntabazalila, says the matter was provisionally withdrawn as the magistrate refused a request for a further remand.

“The docket has been returned to the Investigating officer and the DPP [Director of Public Prosecutions] will decide on whether to prosecute or not after the investigation is finalised.”

Sharon says last month she was arrested by a Philippi police officer on a false charge of assault.

She says during an altercation with a neighbour, he klapped her across the face with a glass and she needed stitches.

“He was drunk and slapped me and started swearing. When I went to report the case, all the cops had an attitude and pointed at me saying: ‘This is Marlon’s wife’.

“They were upset with me because of the shooting and then my neighbour opened a false assault case.

“The community was skelling him and he fell off the stairs. I wasn’t even there yet police arrested me at 3am and now I must appear.”

SAPS spokesperson FC van Wyk says Sharon and her neighbour were arrested on assault charges and advises her to contact the investigator about the alleged victimisation.

‘My hubby’s coffin dug up’

You may now kiss the cook: Soup kitchen lady’s wedding

Shot dead over a mask

Burnt alive: Community worker ’doused with petrol by her boyfriend’ 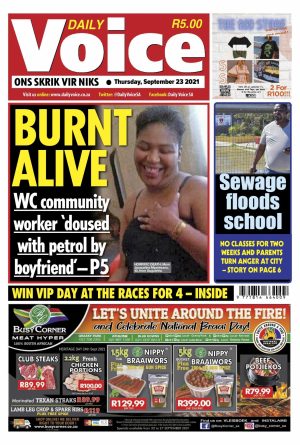