Cape Flats women were pulling their hair out after discovering that Takealot.com is not only selling the “swirlkous” for R149, but marketing the hair accessory as a “Wig Liner Cap Bonnet Stocking”.

The local online store ought to know better than to mess with divas and their “harriets” and the claws were out on social media.

Singer Ramaine Barreiro-Lloyd expressed her shock on Facebook and wrote: “It’s ‘* F*** EN SWIRLKOUS MAN! And besides if it was authentic it would’ve had a moerse gat in it! Wig liner? Tjsek wena! Issi swirlkous!” (sic)

But others felt the drama was not justified, pointing out that there is a big difference between a wig liner and the traditional swirlkous.

A swirlkous, made from cut-up nylon pantyhose, and is generally used to stop kinks from returning after the hair has been blow-dried or “gestryk” (flat-ironed).

The hair is brushed in a clockwise or anti-clockwise direction before the swirlkous is slipped on.

Mense also put it over hair rollers while the hair is being dried.

A wig liner, on the other hand, is used under a wig to protect the hairline, and mense also glue it to the wig to stop the valse hare from slipping off at inopportune moments.

Drag queen Kat Gilardi, who uses the wig cap, says: “Well, I think the difference is it’s now a shop bought and supplied product, but was made by our grandparents and mothers when we were growing up from broken or unused pantihose.”

Facebook user Kim Kay swiglammed mense for confusing the two products: “Please stop with the ignorance. A wig cap is a legit thing and is essential if you want to wear wigs. You can’t be this silly man. No one is selling a swirlkous. Grow up and do your research.”

Other people were more upset about the price of the “Wig Liner Cap Bonnet Stocking”, which retails at between R129 and R149 on Takealot.com.

A Google search revealed the wig liner is being sold for as little as R8 by other online shops.

The Daily Voice contacted Takealot.com about the marketing and pricing of their swirlkouse - ahem, wig liner cap bonnet stocking.

Aviwe Zake from Takealot said yesterday the enquiry was being “escalated”. Jealous husband’s road kill: Wife knifed to death with baby on the backseat

I bought a stolen car for R72K

[WATCH] No brakes in smash: Delivery man dies after crashing into stationary truck 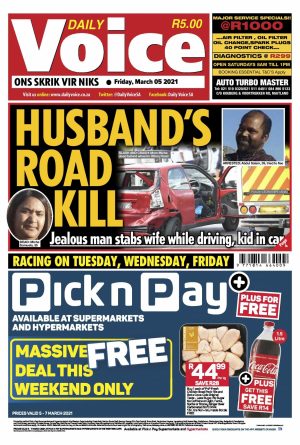